In the heart of the tranquil Bois de Boulogne, Le Pré Catelan has been the domain of celebrated chef and Meilleur Ouvrier de France, Frédéric Anton, since 1997. It must have been a match made in heaven, because ten years later Le Pré Catelan was awarded its third Michelin Star.

Here, 19th-century architecture gives way to the bold modern flair of architect Pierre Yves Rochon, whose interiors in green, black and white offer a dramatic answer to the lush greenery of the Bois de Boulogne just beyond the restaurant's lofty windows. "Complex without being complicated," Anton's modern creations are bursting with imagination and adventure, while desserts are an attraction in their own right thanks to the genius of head Chef Patissier Christelle Brua - who made history this year by becoming the first woman to be named World's Best Restaurant Pastry Chef.

A reference point for modern fusion cuisine, Pierre Gagnaire was named Best Chef in the World in 2015 - at which point his namesake restaurant at Hotel Balzac had been garnering a world-class reputation for a decade. Describing his ethos as "facing tomorrow but respectful of yesterday," Gagnaire is not only the mastermind behind the eponymous Paris restaurant but head chef at 15 restaurants scattered across the globe. A summer internship under Paul Bocuse set him on the road to greatness and Gagnaire went on to earn his first trio of Michelin Stars in 1993. When this first restaurant in St. Etienne declared bankruptcy the food world was understandably astonished, but Gagnaire didn't miss a beat. Switching his focus to Paris, he earned back his three Michelin Stars in just two years right here, at the Hotel Balzac. There's a cosy atmosphere in the hushed, softly lit dining room, where pages from books cover the walls occasionally decorated with beautiful ink drawings. On the plate you can expect all the invention, innovation and excitement for which Gagnaire is famous.

Alléno at the Pavillon Ledoyen

In the Neo-Classical mansion in which Napoleon is said to have met Josephine, you'll be surrounded by original frescoes and bathed in natural light as dishes by inventive Parisian chef Yannick Alléno weave their way through grand yet intimate spaces. Alléno took the helm in 2014, bringing exceptional modern French cuisine with him. Famous for his "extractions" and outstanding technique, Alléno showcases the avant-garde in historic surroundings with dishes such as Lobster with Charcoal - spinach fondue with basil, jus and ravioli lobster with lovage. 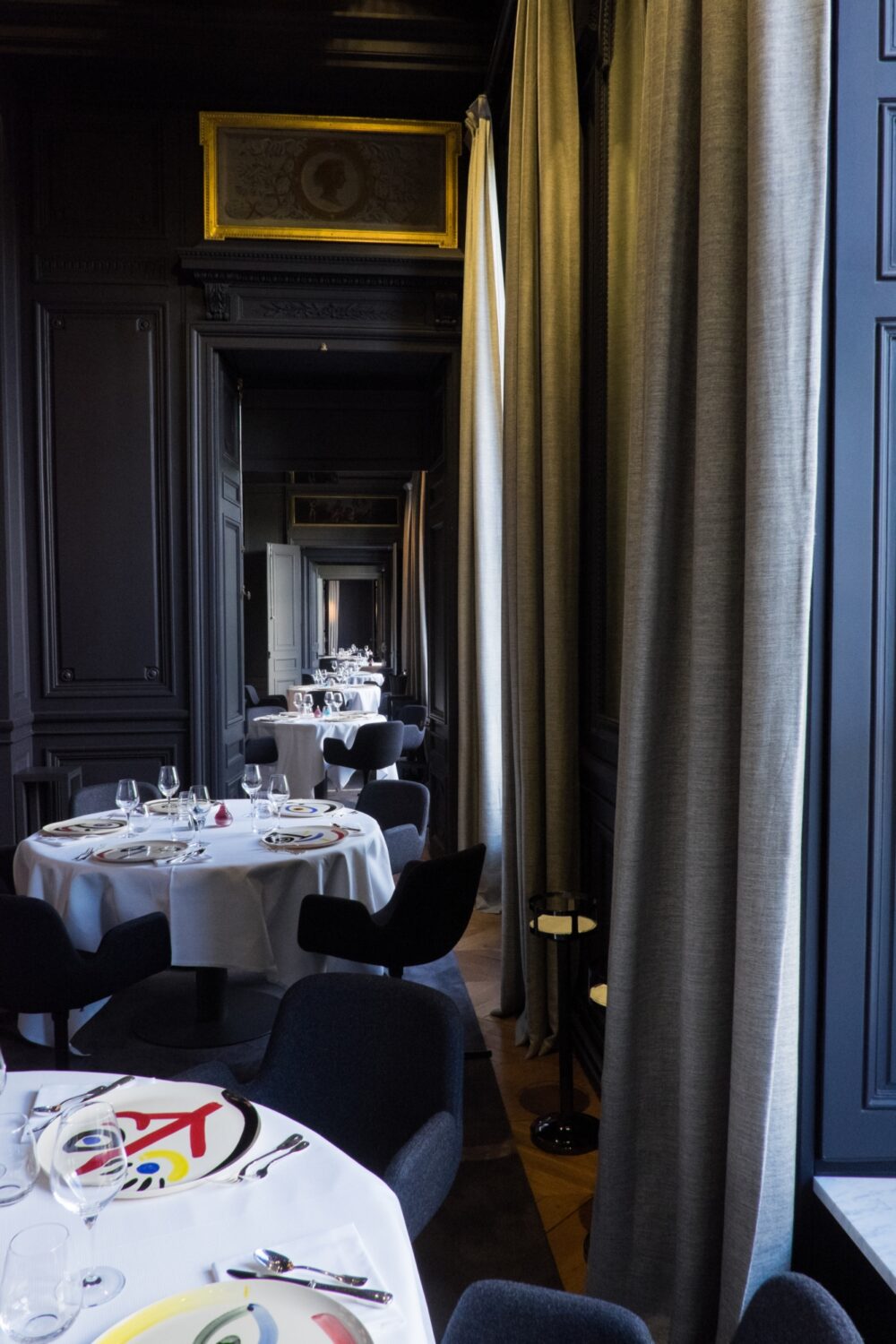 First opened in 1980, Guy Savoy moved his eponymous restaurant to the Monnaie de Paris - France's main mint - in 2015, a location just about luxurious enough to match the cuisine of this celebrated French chef. (Just). Surrounded by contemporary art pieces and a palette of slate grey, all attention will be on dishes like Medallion of veal sweetbread seared with vadouvan spices in a parsley crumb, chestnut purée with confit chestnuts and sautéed mushrooms. And with views overlooking the Seine, the Louvre and the Pont des Arts, Paris locations don't get much more iconic than this. You certainly won't leave hungry, just with a lighter wallet. 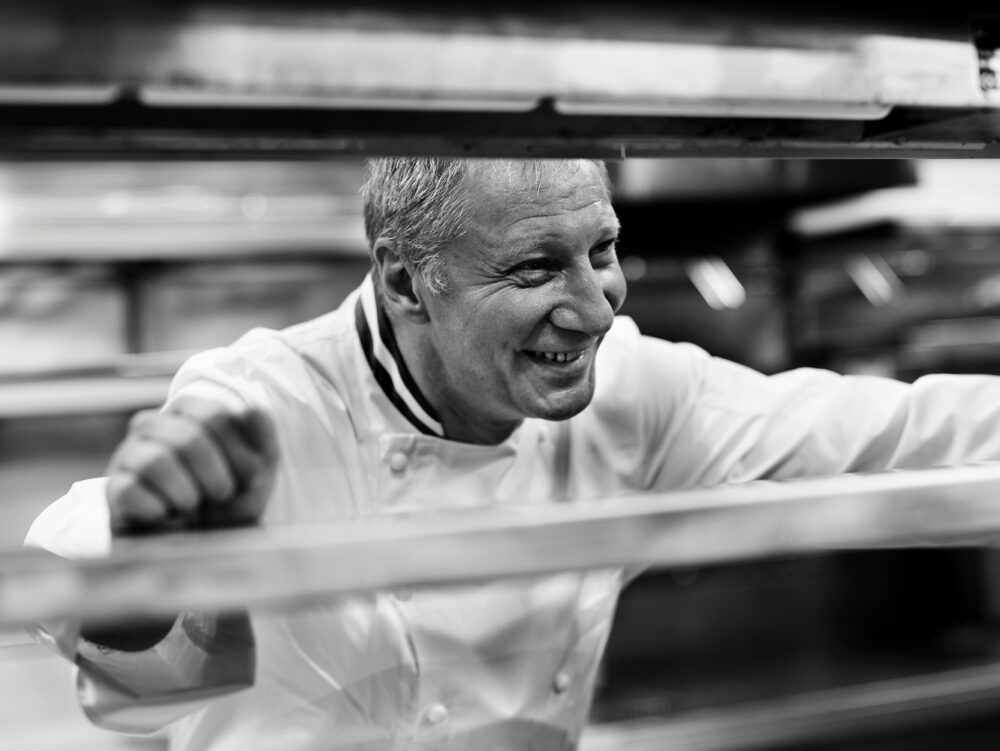 Eric Fréchon with his tricolor collar - the mark of the Meilleur Ouvrier de France! ©LeBristol

With the feel of a luminous garden room, Epicure at Le Bristol is the domain of Eric Fréchon, triple Michelin Star French chef, Meilleur Ouvrier de France, and Knight of the Order of the “Légion d’Honneur”. So all in all, a pretty fancy fella. Famed around the world for his signature macaroni stuffed with black truffle, artichoke and duck foie gras, gratinéed with aged Parmesan, Fréchon has garnered countless awards for Epicure - not least the title of Best Restaurant in the World - and the dining experience here continues to be one of the most outstanding in Paris. If you want to vicariously dine there for yourself, you can do no better than to read David Lebovitz's blog post all about his time there - with photographs that will soon have you booking flights!

In terms of a historic location, L'Ambroisie couldn't be much better placed. Flanking the beautiful Place des Vosges in the Marais, this iconic Paris restaurant has been home to three Michelin Stars since 1988 - making it a record-breaker in the city. And while similarly successful chefs are often juggling multiple starred restaurants around the world, Bernard Pacaud can only be found in one place - in the kitchen at L'Ambroisie. There's no tasting menu here, just à la carte dining that has brought regular Paris diners back again and again (and again) for thirty years. At L'Ambroisie the somewhat aloof service and muted ambiance are as much a part of its fame as Pacaud's astonishingly crafted seasonal fare. Who knows when the illustrious chef will retire - he already tried once but was lured back into the kitchen - so if you're looking to bask in a little of Paris' culinary history, this is the booking to make.

If you like to dine in jaw-dropping spaces, Alain Ducasse at the Plaza Athénée might be the one for you. It seems to be raining Swarovski crystals in the immaculate white dining room, where moulded ceilings and Corinthian columns are juxtaposed with contemporary shell-chairs and curvaceous couches that verge on the futuristic. Here, it's all about the freshest seasonal produce, which is lovingly watched over by Alain Baraton - head gardener of the Trianon and Grand Parc de Versailles - before the very best is chosen, picked and delivered to the restaurant just hours before serving. Having reinvented his restaurant in 2004 to be sustainable, healthy and environmentally friendly, Alain Ducasse is a haven for lovers of organic cuisine with a conscience.

The dining room at Arpège ©SDelpech70

Synonymous with luxurious dining, the name Arpège instantly invokes an ooohh! in food-loving listeners. Alain Passard opened Arpège in 1986 and was awarded one Michelin Star just one year later. Since 2001, Arpège has been all about fresh organic vegetables, grown in three dedicated kitchen gardens - one of which has its own orchard, not to mention two donkeys, cows, a goat, some chickens... There are no pesticides used, and veggies and fruits are picked every morning ready for the day's creations. Choose between the Vegetable Tasting Menu (350€) and the Earth & Sea Tasting Menu (420€) and give yourself over to Passard's imagination. Don't miss the chef's iconic apple tart, the “Bouquet de roses,” with it's rose-tinted swirls.

Modern French cuisine with a Far-Eastern twist is Pascal Barbot's secret weapon at L'Astrance, a small and sophisticated restaurant in Paris' 16th arrondissement. Having trained under Alain Passard at L'Arpège, Barbot takes all of his adventures around the world and pours them into his haute cuisine menu, which is full of Asian hints such as miso, Chinese dates or bergamot coulis. Wines are organic, biodynamic or natural and sourced from across France. With room for just 25 diners, you'll want to book months in advance to experience the imagination of L'Astrance.

Le Cinq at the Four Seasons 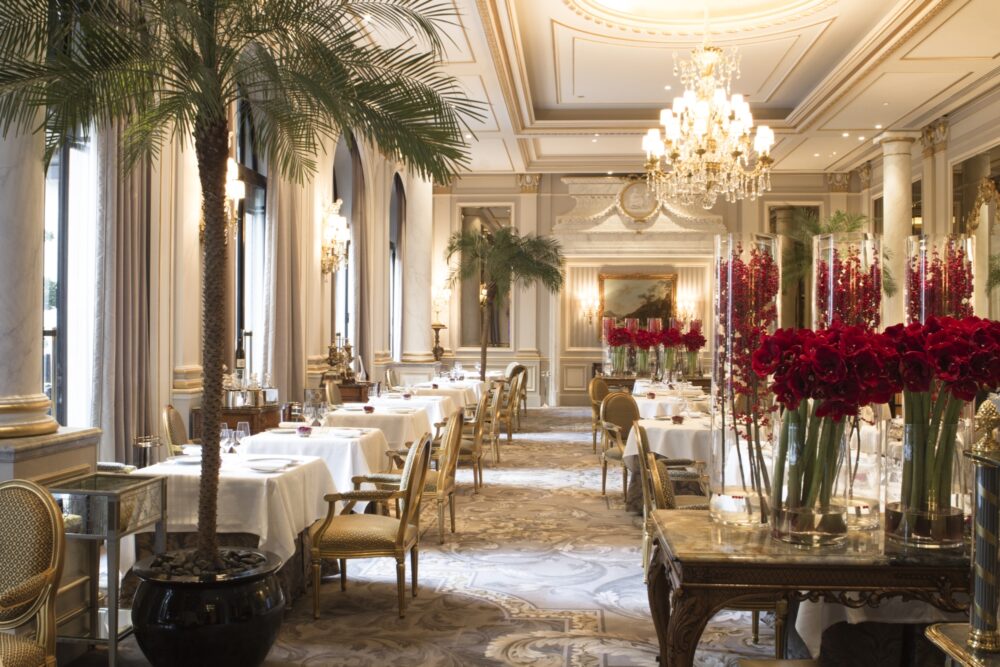 In the heart of one of Paris' most prestigious hotels, Le Cinq is home to 3 of the hotel's 5 Michelin Stars, thank to celebrated chef Christian le Squer. Classically elegant in grey and gold, you'll be able to admire gilt Louis XVI chairs, Louis XIVth wardrobes and a beautiful marble courtyard as you prepare yourself for the meal ahead. The latest seasonal menu might include grilled fillet of turbot with black truffle or roasted venison with charcoal, and you might need a while to choose your preferred wine from the cellar of 25,000 references - but you'll have the help of celebrated sommelier Eric Beaumard, so all is well. You could always go for the magnum of Pétrus from 1959 of course, but you'll need to add an extra few thousand euros to your budget.