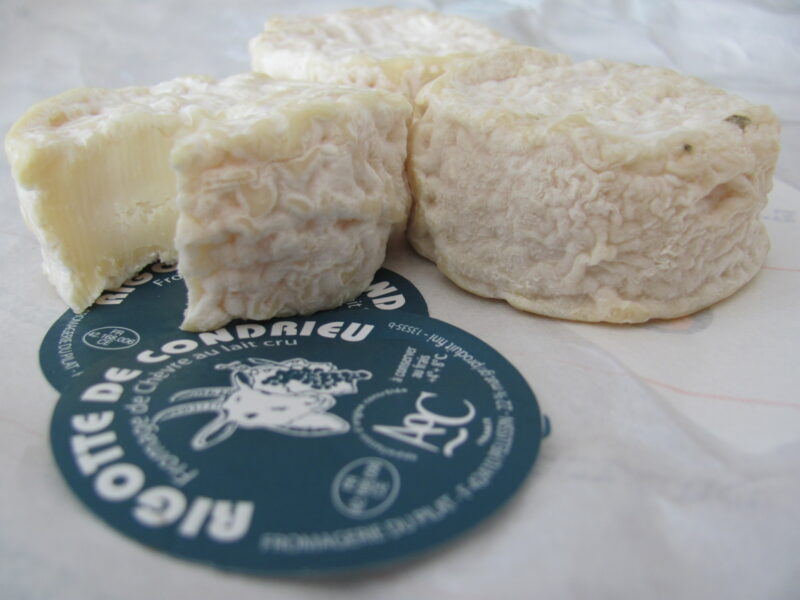 We love the name of the Rigotte de Condrieu because it conjurs up such idyllic scenes - once you know what it means, that is! The 'Rigotte' in the name comes from the terms 'rigol' or 'rigot', which refer to the countless small streams that pour down the slopes of the Pilat Massif, while Condrieu - a small town south-west of Lyon - was home to the market at which this little goats cheese was sold.

So you have a picture in your mind now of mountainous slopes and meandering streams and bustling markets from days gone by, yes? Good! Now we add the cheese-sellers of Rigotte de Condrieu, who have travelled into the town from the slopes of the Pilat Massif to sell their little goats cheeses, having ladelled them into their puck-shape moulds and waited around ten days for the cheeses to develop their ivory crust and soft, hazelnutty interior. These are the women of the Rigotte de Condrieu, who were the ones to tend to the goats on the farms and make the cheese, earning it the name of "porte-monnaie des femmes" - the women's purse - because it allowed them to bring in a little extra pocket money.

Traditionally, Rigotte de Condrieu is dried in a kind of pantry, where once again the terroir comes into play. The weather in the Pilat region is notoriously windy, but the blustery weather was in fact an ally in the cheese ripening process, helping the little goats cheeses to dry.

And to think, the modern world might have missed out on Rigotte de Condrieu altogether! The popularity of goats cheese (and keeping goats) fell after the Second World War, but luckily for us, goats cheese enjoyed a resurgence in the 1970s, with small producers rediscovering the old traditions of the past. So it was with Rigotte de Condrieu. In 2009, this tasty goats cheese won AOC status - making it the most recent inductee - and going on to gain AOP status in 2013 - and if you want to know all about what that means, check out our handy blog post on the subject here.